The 2018 Referendum in Macedonia was provided by Demokra management platform. Since 2006, the year when the State Election Commission of Macedonia (SEC) was formed as a permanent body, it uses the Demokra technology enabling transparency and reliability of the election results. The Demokra technology increases the integrity in the democratic process as well as the citizens engagement and trust by using technological state of art and future trends.
Elena Temelkovska, the iVote CEO announced that, as a reliable partner of SEC, iVote has provided a software solution for the referendum held on September 30th, 2018. She said that the information were handed on time and presented officially.
Demokra has played a critical role by creating more transparent and inclusive electoral processes. It is consisted of several different modules such as managing the Referendum Day, administration of user privileges, generating reports, statistics and documentation. Over 1.8 million registered voters had the right to cast ballot. In addition, the system had simultaneously proceeded information from over 3500 polling stations. 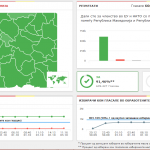