Rarely there are companies with more than one country’s reference, and last night the iVote team did it in unprecedented two.The iVote team are seasonal election technology professionals with more than 20 years of experience. This is the very first time that the team has delivered 2 parallel projects in a same election day, both for local elections in two different countries.

Local elections in Macedonia and Kosovo have been supported by iVote Demokra Election Management System, which is integrated end-to-end election management platform. iVote provided on-premise and in the cloud solution that enabled credible, timely and transparent publication of the preliminary results. More than 30 milion pages in total were served by the iVote Demokra platform during the election night. 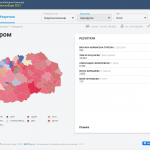